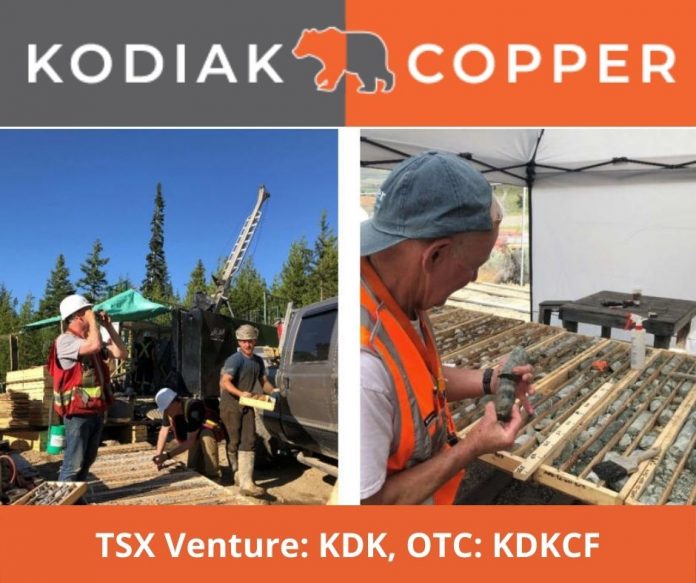 Bullish copper? We are. And so is Goldman Sachs.

Kodiak Copper Corp (TSXV:KDK, OTC:KDKCF) is applying a proven exploration approach to its MPD copper asset in Southern B.C. which has resulted in the “Gate Zone discovery” in September 2020 – the best drill results in the 50-year history of the project. The discovery attracted mining giant Teck Resources to invest $8 million into the Company.

They are not slowing down. This year Kodiak has two drill rigs turning on a fully funded drill program of up to 30,000 meters and have already expanded the Gate Zone discovery strike length by 6 times (from 125 meters to 800 meters) with the latest round of drill results (See news release dated July 7th, 2021)

British Columbia is home to one of the largest, most productive mineral trends on the planet.  The Quesnel Terrane (more commonly known as the Quesnel Trough) is a Triassic‐Jurassic age arc of volcano sedimentary rocks that hosts a number of large copper and gold porphyry deposits, several of which are currently in production.

Today’s exploration and mining companies have been met with tremendous success in revisiting historic data, using modern exploration techniques.  Systematic geophysics and diamond drilling allow for examination and testing of rock well beneath historic workings for the first time, opening up potential for major new discoveries.

Kodiak Copper Corp (TSXV:KDK, OTC:KDKCF), situated in proximity to some of these giant mines, including Teck Resources Highland Valley copper mine (the largest open pit copper mine in Canada) was founded by Chairman Chris Taylor, also a founder of Great Bear Resources (TSXV: GBR, OTC:GTBAF) whose valuation reached nearly a billion dollars (CAD) in the Summer of 2020.

Mr. Taylor’s Great Bear Resources (TSX:GBR) saw its share price skyrocket from 0.60 to nearly $20 in less than two years, creating fortunes for his fan base.

Kodiak is also part of the prestigious Discovery Group, giving them unparalleled access to an alliance of resource-based public companies collectively working on over twenty projects from grassroots exploration to mine development in Canada, the US and Latin America. In the last 12 months Discovery Group companies have raised in excess of $350 million in equity.

Chris Taylor is at it again, teaming up with a former GM of Rio Tinto and now President and CEO of Kodiak, Claudia Tornquist.

Kodiak Copper Corp (TSXV:KDK, OTC:KDKCF) is implementing a strategy similar to the one that made Great Bear a resounding success, this time targeting copper and gold in a large porphyry geological setting.

Kodiak is focused on its 100% owned copper porphyry projects in Canada and the USA. The Company’s most advanced asset is the MPD copper-gold porphyry project in the prolific Quesnel Trough in south-central British Columbia, Canada, where the Company made a discovery of high-grade mineralization within a wide mineralized envelope in 2020.

On April 19th, the Company announced that it has added the 4,980 hectare Axe property which is contiguous with their MPD Project.

Given the Company’s aggressive drilling plans for 2021 (up to 30,000m of drilling), and robust fundamentals for the copper market, this may be the perfect storm for investors seeking strong growth situations.

On January 5th The company released an Annual Shareholder Letter summarizing 2020’s success story while providing guidance on what shareholders can expect this year.

Kodiak is fully funded for up to 30,000 metres of drilling as well as further geophysical and geochemical surveying, prospecting and geotechnical studies. The drill program will commence early in the year with one drill rig, with plans to add further rigs as work progresses.

In November 2020 the Kodiak Copper team, including CEO Claudia Tornquist and Chairman Chris Taylor, recently hosted the Spotlight Mining team at their MPD copper-gold porphyry project to film this site tour; a perfect introduction to the opportunity for investors new to the story.

On July 7th Kodiak released the first drill results of its 30,000 meter, 2021 drill program at MPD highlighting a significant 6-fold increase in the strike length of the Gate Zone discovery, expanding it from 125m to approximately 800m in a North-South direction.

Claudia Tornquist, president and chief executive officer of Kodiak, said: “We are delighted with the 2021 drill results to date. This is a big step forward, validating our thesis that MPD has the potential to host a major porphyry system. We have still only tested a portion of the target area defined by the copper-in-soil anomaly that is related to the Gate zone mineralization. We are also looking forward to further exploration along the underlying three-kilometre-long magnetic trend that extends all the way to the Man area which has historical copper in trenches and shallow drill holes. With two drill rigs turning now we also plan to turn our attention to other, equally promising target areas such as Dillard in the second half of this year.”

Given the Company’s acclaimed leadership team’s history of delivering tremendous success to shareholders and a strong outlook for the copper sector, we encourage investors to familiarize themselves with the Kodiak story as the company continues to aggressively build on exploration success to date.

Mining giant Teck Resources is a major shareholder, having purchased their shares at a cost of $1.95/share.

By using this website, you acknowledge and agree that you will comply with the terms of use, policies, disclaimers, and limitations of liability set out by HSR at hotstocksreview.com/disclaimer.

Those terms include your acknowledgement that: (i) HSR is neither an investment adviser nor a broker-dealer; (ii) the information presented on this website is for informational purposes only and is not to be treated as advice or a recommendation to make any specific investment; (iii) you should consult with a registered investment advisor or financial advisor before making any investment decisions; and (iv) HSR provides readers with information regarding publicly traded companies that may have paid a fee to HSR to provide promotional services on their behalf, or of which HSR and its directors, officers, or employees may own securities.

Contributor - October 21, 2021
After having provided an update with regards to its participation at a key industry event last week, Telo Genomics Corp (TSXV:TELO) came into sharp...

Contributor - October 19, 2021
The coronavirus pandemic may have come as a hammer blow for most businesses but there were some sectors that prospered and one of those...

3 Best Cannabis Stocks To Add in Your Portfolio

Contributor - October 8, 2021
Last year the cannabis space had been in the middle of a lot of pain but things started to look up somewhat this year...