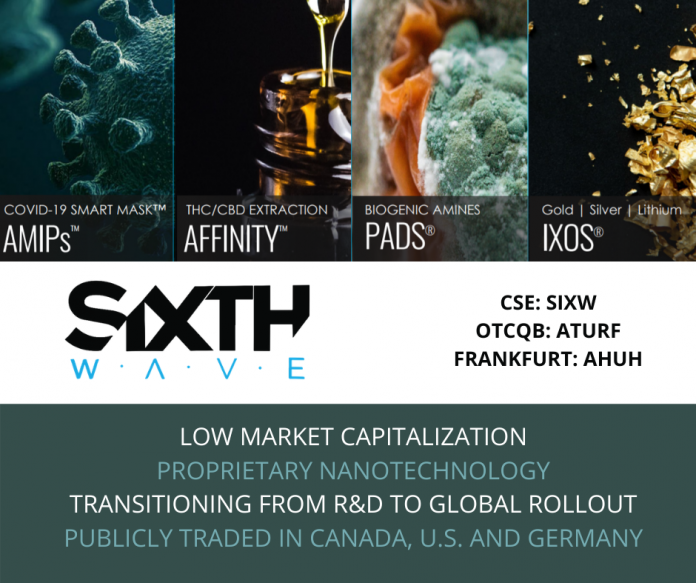 Viral mutations and speed of mutation are areas of acute concern in the scientific community.   Though this has not made the news yet the possibility that these will totally invalidate any of the immunoassay based rapid tests is of particular concern.   Not only do we not know if they will still be capable of detecting variants; if they don’t or are significantly degraded then they are useless in monitoring the ongoing outbreak.

Sixth Wave (CSE: SIXW, OTCQB: ATURF) AMIPs (synthetic as opposed to organic) should be relatively unaffected by the current state of mutations because their system does not immobilize the virus using antibodies and does not respond to the detection based on the antibody/antigen binding mechanisms. MIPs are infinitely adaptable and easily scalable.

For investors in shares of Sixth Wave, this could be a game changer.

Demand for rapid testing solutions will continue to outstrip supply for the foreseeable future, even with the development of vaccines – an almost incalculable opportunity exists for investors as this, and future, pathogens evolve.

Nanotech companies are quickly emerging as heroes in the race to commercialize adaptable, highly scalable platforms for rapid diagnostics, testing and detection.  Enabling “safe spaces” at home, work, public transportation and public spaces are paramount to containing and ultimately eliminating risk of spread.

Solutions are on the horizon and massive profits have already been realized by investors positioning early.

Companies such as Sona Nanotech and ImmunoPrecise Antibodies (TSX Venture: IPA) are racing to develop antibody-based test kits in a highly crowded, incredibly competitive field. Antibody-based immunoassays are rife with risks associated to handling, storage and transportation of organic compounds required to enable these platforms.

In what may prove to be a game-changer in the race to develop a highly scalable, adaptable and non-organic (synthetic) solution, Sixth Wave Innovations (CSE: SIXW, OTCQB: ATURF) is rapidly moving forward with its own patented and patent-pending platform utilizing Molecularly Imprinted Polymers (MIPs) for the rapid detection of pathogens.

In layman’s terms Molecular imprinting produces polymer beads specially formulated to capture a specific target molecule (pathogens in this case). The process creates cavities within the nanosized bead that match the shape of the target substance and then the particles “complete themselves” by filling the voids.

Utilizing nano-sized synthetic polymers for viral detection de-risks the platform significantly, and places the Company in it’s own theater away from the crowded field of organic immunoassay-based testing systems.

Sixth Wave Innovations (CSE: SIXW, OTCQB: ATURF) has all the pieces in place to propel the company rapidly forward in its goal to provide an effective and highly scalable solution to the ongoing health crisis.

The company’s market capitalization sits at just under CAD $40 million. While this article is focused on the company’s pathogen detection platform being developed, it’s important for investors to note Sixth Wave is also actively developing and moving toward commercializing game-changing solutions in cannabis (CBD purification) and mining (mineral separation). Each of these verticals holds the potential to catapult Sixth Wave into serious revenue generating territory.

Sixth Wave Innovations is led by a high profile, high performance team of scientists, accomplished executives and business development specialists. Their advisory board includes Hon. Grant Mitchell (Senator, Alberta), Hon. Jay Cohen (Rear Admiral, ret.) and Dr. David Fransen who has has provided strategic leadership across a wide range of economic policy and program sectors as a senior official at the Privy Council Office and Health Canada, as an Assistant Deputy Minister at Industry Canada.

The company is developing a patent-pending Accelerated Molecular Imprinted Polymers (AMIPs™) system for the rapid detection of pathogens. On its road to commercializing the technology globally, Sixth Wave recently announced obtaining financial backing from the Government of Nova Scotia’s C19 Response Council, followed by a joint development initiative with the University of Alberta’s Institute of Virology.

Dr. Jon Gluckman, CEO of Sixth Wave stated “Sixth Wave has a substantial history of delivering similarly complex MIP based solutions within limited timelines, as evidenced by our explosives detection wipes and bacterial pathogen diagnostic tools. We welcome this opportunity to once again prove the utility of molecular imprinting as a detection and diagnostic tool, especially in circumstances of such importance to public health and security.”

“The technology being developed by Sixth Wave could revolutionize virus detection platforms to manage current and future viral threats. My team’s extensive experience with synthesizing and characterizing responsive/reactive polymer systems for sensing applications, combined with the knowledge and expertise resident in the Li Ka Shing Institute of Virology, makes this collaboration a natural fit and poised for success,” noted Professor Serpe.

The government grant further legitimizes Sixth Wave’s technology, and advances the company’s trajectory toward the productization and eventual goal of commercializing the platform globally.

In the wake of the NSCRC $250,000 grant, the Company’s intention is “to incorporate the AMIPs technology into a several rapid-detection products, including rapid virus test kits, SmartMask, as well as air and water monitoring systems”.

AMIPs holds many advantages over current market offerings, placing Sixth Wave Innovations in a position to lead the way in the race for a durable, scalable and easy to use solution for detecting and ultimately containing viral spread.

We suspect that as this remarkable story filters into the mainstream, Sixth Wave’s share price could more accurately reflect the potentially significant value surrounding their platform technologies as the company moves from R&D toward commercialization.

The platform is infinitely scalable and adaptable. AMIPs technology allows Sixth Wave to configure tests to screen for multiple infections at once. By detecting classes of viruses, researchers can deploy new diagnostics without cultivating antigens or collecting antibodies in the case of novel viruses.

In development and in partnership with NeoCon International, Sixth Wave is currently designing Smart Mask™, envisioned to incorporate the use of AMIPS for rapid virus detection into an N95 Compliant, or other mask / respirator.

Smart Mask™ could provide the standard protective capabilities of an N95 mask, with the added interactive capability to alert the user that a target virus has been detected in the exhaled breath of the user.

Sixth Wave announced in June that it has entered into a partnership with York University and CTRI (Centre Technologique des Residus Industriels) to further develop AMIPs for the use in airborne viral detection systems.

The partnership intends to develop a prototype to be tested and used in a broad range of settings, including the public sector, private industry, hospitals, long term healthcare facilities and various forms of public transportation.

Sixth Wave’s AMIPs platform is being developed to provide full spectrum solutions supporting a global “safe space” initiative. Their systems are designed to be infinitely scalable, easy to use and implement, and have a rapid development time for new detection signatures.

The combined addressable market size potential for the company’s suite of offerings is significant.

Now backed by Province of Nova Scotia, Sixth Wave Innovations (CSE: SIXW, OTCQB: ATURF) aims to have a Phase 1 prototype ready by Q1-2021 and planning a global rollout by Q3, setting up for what might kick off a significant run on the stock.

The company is currently under the radar however this could change in short order as a very capable leadership team prepares to move Sixth Wave from an understated R&D firm to a full blown nanotechnology powerhouse.

With a market capitalization of ~$40 million and the table set for strong growth ahead, the future looks bright for Sixth Wave Innovations.