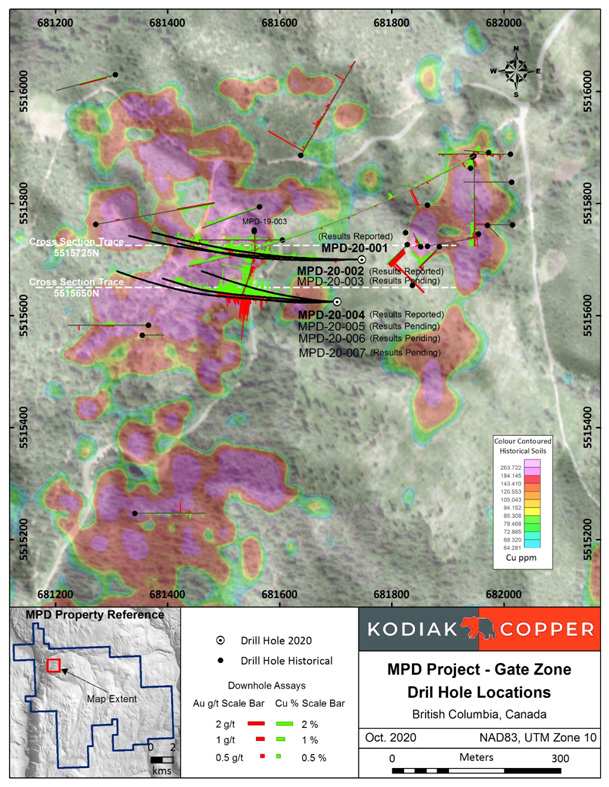 Claudia Tornquist, President and CEO of Kodiak said, “We are pleased to report complete assays for two holes of this year’s drill program at the Gate Zone. We previously reported the discovery of a high-grade copper-gold zone central to MPD-20-004 having 1.16% copper equivalent over 282 metres. This is one of the most impressive copper gold intercepts reported from a porphyry project in southern B.C. New results confirm that this high-grade zone is not unique, but part of a wider mineralized envelope intersected over 535 metres in MPD-20-004 and 642 metres in MPD-20-002. We are looking forward to receiving results for hole MPD-20-005 over the coming weeks and from additional holes later in 2020 and into early 2021. Drilling at the Gate Zone is ongoing and we continue to intersect copper-gold mineralization with strong alteration characteristic of a large porphyry system. As we round out the 2020 program, we are also making plans for a very active 2021, where we will also test other high-priority targets across the property.”

The Gate Zone was discovered in 2019 at the north end of an approximately one kilometre long (north-south) by 300-metre-wide (east-west) copper-in-soil target is present (Figure 3). Drilling has focussed on determining the extent of copper-gold mineralization around discovery hole MPD-19-003 by drilling “fans’ of angled drill holes from several setups.

Kodiak’s drilling has encountered significant copper-gold mineralization and altered porphyritic host rocks that display all the hallmarks of a well-developed alkalic porphyry system. Future drilling will prioritize sites along the coincident copper in soil anomalies, and at “Gate-like” analogues found elsewhere on the property such as the Dillard Zone. Kodiak has a multi-year, area-based exploration permit for the MPD Project to late 2021.

Kodiak has also granted 30,000 stock options to a consultant of the Company, exercisable at C$2.28 per share for a period of one year.

On behalf of the Board of Directors
Kodiak Copper Corp.

Kodiak is focused on its 100% owned copper porphyry projects in Canada and the USA. The Company’s most advanced asset is the MPD copper-gold porphyry project in the prolific Quesnel Trough in south-central British Columbia, Canada, where the Company made a discovery of high-grade mineralization within a wide mineralized envelope in 2020. Kodiak also holds the Mohave copper-molybdenum-silver porphyry project in Arizona, USA, near the world-class Bagdad mine. Kodiak’s porphyry projects have both been historically drilled and present known mineral discoveries with the potential to hold large-scale deposits.

Kodiak’s founder and Chairman is Chris Taylor who is well-known for his gold discovery success with Great Bear Resources.  Kodiak is also part of Discovery Group led by John Robins, one of the most successful mining entrepreneurs in Canada.

Contributor - September 24, 2021
There has been a strong selloff over the course of this month but for long-term investors, it might be an opportunity to pick up...

Contributor - September 21, 2021
The tech sector remains one of the most popular sectors for investors and it is no surprise that almost every day there are investors...