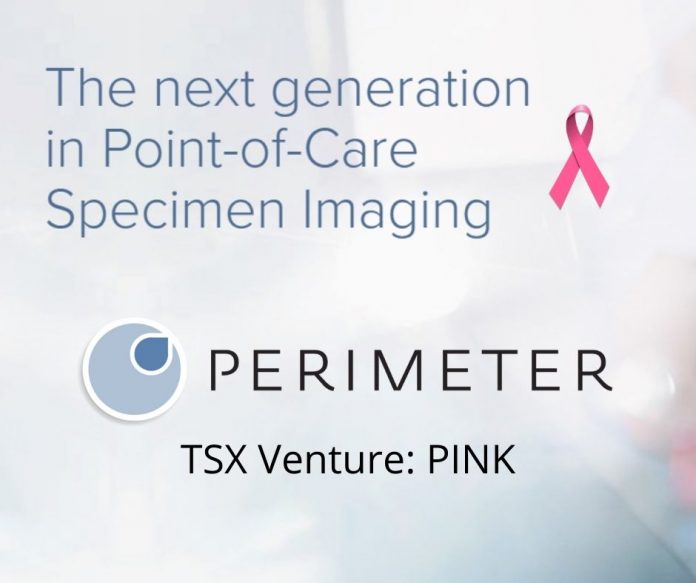 On August 26th Perimeter (TSXV:PINK) announced the appointment of Aaron Davidson (Senior VP Corporate Development and CFO, Profound Medical, PROF on NASDAQ) to their board of Directors.  Given his role in multiple big exits during his career as a medtech investor while leading HIG Capital’s Life Sciences investment activities, that appointment on its own is a very significant development for Perimeter, but this piece is going to focus on the September 1st announcement that Perimeter (TSXV:PINK) added Steve Sapot (former Senior VP of medical sales of Faxitron) to the newly created position of Chief Commercial Officer.

Mr. Jeremy Sobotta, CEO of Perimeter (TSXV:PINK), stated: “We are excited to welcome Steve to Perimeter’s senior leadership team as he takes on the newly formed chief commercial officer role at a time when we are executing and ramping up our commercialization strategy. A proven sales leader who has launched numerous new 510K products and managed multimillion-dollar P&L, Steve’s expertise in the medical device sector represents an ideal fit for us. During Steve’s tenure at Faxitron, he led a capital sales team that resulted an install base of thousands of new radiography systems in leading hospitals and breast cancer centres around the globe.”

The significance of this addition to Perimeter’s already world class leadership team is underscored by Mr. Sapot’s role in leading Faxitron to reach an installed base of over 7,000 specimen-radiography systems in hospitals and breast cancer centres around the US and Europe.

This is because the installed base of Faxitron’s X-Ray boxes is in fact a good proxy for Perimeter’s market in breast cancer.  Faxitron is a company that developed an X-Ray-based medical imaging device that is used ONLY in breast cancer surgery, and was designed primarily for one purpose: to assist a surgeon in determining that the surgical guidewire has been removed from the breast during the cancer surgery.

In the Western World, over 10,000 specimen radiographs have been installed in hospitals and clinics that perform breast cancer surgery; over 7,000 of them are Faxitron’s.

Based on Perimeter’s consumable being priced at US$750 each, if Perimeter can reach the same installed base as Faxitron over time, an installed base of 7,000 Perimeter devices would generate over US$500M/year in 90% gross margin consumables revenue, based on a device being used for 2 procedures per week on average, for 50 weeks a year.  (If Perimeter (TSXV:PINK) expands into other types of cancer surgery, average procedures/week should increase, and note that the US$500M/year figure does not include revenue from device sales; based on an ASP of US$150,000 for Perimeter’s imaging platform, an installed base of 7,000 would have generated revenue of US$1B in equipment sales.)

With Aaron Davidson (who was one of North America’s most successful medtech investors during his 15 years at HIG Capital where he led the Life Sciences investment division) having joined the Board last week, and Faxitron’s former head of sales now having joined as Chief Commercialization Officer, Perimeter now has an arsenal of executive firepower capable of penetrating a multi-billion dollar market in dire need of their platform technology.

And let’s not forget how perfect Mr Sobotta’s past experiences are for a company like Perimeter: Jeremy joined the company as President and CFO on December 1st, 2019, after 12 years with Stryker and Smith&Nephew, two of the worlds’ largest medtech companies.  His roles were primarily in two areas:

1) M&A (where, not coincidentally, he was involved in 3 of the M&As listed in the industry M&A table in Perimeter’s corporate deck); and

2) developing commercialization strategies across several different businesses and geographies with the two companies.

Dr Frank Prendergast, the former Chairman Emeritus of the Mayo Clinic’s Cancer Center is on Perimeter’s Board of Directors and Clinical Advisory Board.

Dr Ted James, the Chief of Breast Cancer Surgery at Harvard Medical School, is Chair of Perimeter’s Clinical Advisory Board.

Between Perimeter’s management, Board of Directors and Clinical Advisory Board, Perimeter (TSXV:PINK) arguably has the best team of any emerging medical device company in North America.

An important point to reiterate regarding Perimeter technology is that it’s imaging modality is 100x higher resolution than MRI, and 8-10x higher than X-Ray and ultrasound—this is what provides the fundamentally disruptive, differentiated capability relative to any other imaging platform in the market today.

In addition, Perimeter’s device has the potential to be used in a broader range of cancer surgeries than Faxitron’s X-Ray box.

One could therefore imagine that the 7,000-device installed base of Faxitron’s box will prove to be a conservative proxy for the ultimate potential installed base for Perimeter’s OTIS device.

Nothing in this publication should be considered as personalized financial advice. We are not licensed under any securities laws to address your particular financial situation. No communication by our employees to you should be deemed as personalized financial advice. The information provided in this article is for informational purposes only and is not a recommendation to buy or sell any security. Please consult a licensed financial advisor before making any investment decision. We hold no investment licenses and are thus neither licensed nor qualified to provide investment advice. The content in this report or email is not provided to any individual with a view toward their individual circumstances. HotStocksReview.com is a website owned by Mountain Capital Corp (“Mountain”), (100 King Street West #5700, Toronto, Ontario). Mountain has been retained by Perimeter Medical Imaging AI Inc (“Perimeter”). to provide strategic digital media, marketing and data analytics services on behalf of the company for an undefined term. The agreement with Perimeter provides for a one-time cash-only payment. This compensation constitutes a conflict of interest as to our ability to remain objective in our communication regarding the profiled company. Because of this conflict, individuals are strongly encouraged to not use this newsletter as the basis for any investment decision.

Psychedelics are being decriminalized, shroom stocks are soaring.

Meet the Maps for underground infrastructure and the sizzling investment opportunity behind it.

Meet the Maps for underground infrastructure and the sizzling investment opportunity behind it.