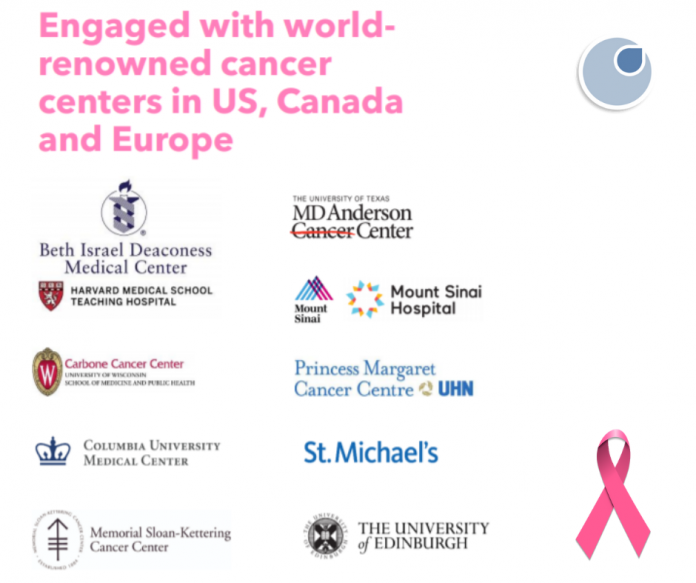 Unlike most emerging medical device companies, Perimeter is addressing an unmet medical need (i.e., NOT competing with technology already in the market from giants such as Medtronic, Stryker and Intuitive Surgical) with a technology that provides 8x to 100x improvement over existing imaging technologies.

The Company’s initial total addressable market size for the consumable alone, just in the breast cancer surgery market, is US$794 million per year. The total cumulative capital sales which would be associated with achieving that level of annual consumables revenue is over US$750M. Because this is a platform technology that can potentially be applied to other forms of cancer, as well as other parts of the cancer surgery workflow, a total global addressable market of $3.7 billion exists in just the consumable’s portion of their business model.

Perimeter also now owns the net current assets that were in the shell at the time of the RTO. As of September 30, if nothing had changed other than the market price of the publicly traded stock that the shell owned, the value of the net current assets that came to Perimeter from the shell would be close to $7 million, which is close to a year’s worth of gross cash burn at the time of the RTO.

Led by an accomplished, high profile, world class management team and advisory board, Perimeter continues to attract top-tier talent to its board of directors and is entering the 3rd quarter with a strong cash position.

Read our coverage on Perimeter’s most recent additions to the Board, including Aaron Davidson (Senior VP Corporate Development and CFO, Profound Medical, PROF on NASDAQ) and Steve Sapot (former Senior VP of medical sales of Faxitron) to the newly created position of Chief Commercial Officer.

Jeremy Sobotta (President and CFO), having been part of deploying over $4B in capital into M&A from the acquirer side while at Stryker, says “We believe Perimeter is well capitalized in order to support our clinical development and commercialization plans.”

The Company’s initiatives and accomplishments thus far are not going unnoticed.

Perimeter was also recently featured on the Fox26 Houston Morning Show where Dr. Alastair Thompson, Section Chief of Breast Surgery at the Dan Duncan Comprehensive Cancer Center, explains how the Company’s A.I. and machine learning “plug in”, currently under development, is being used to detect cancer cells that may have otherwise been left behind during initial surgery.

The following is an excerpt from their recently release Second Quarter financials, providing an excellent overview of the Company’s accomplishments to date. The full press release can be found here.

Jeremy Sobotta, Perimeter’s President and Chief Financial Officer, stated, “We have achieved a number of key milestones in the last few months, including successfully transitioning to a public company and raising approximately $9.4 million in net proceeds from a private placement offering. With the potential for further capital proceeds of approximately $13.5 million from the exercise of associated warrants, along with approximately $8 million of available funding from the grant received from the Cancer Prevention and Research Institute of Texas, we believe Perimeter is well capitalized in order to support our clinical development and commercialization plans.”

In July 2020, Perimeter announced the initiation of its ATLAS AI Project, which will collect images of breast tumors to both train and test its ImgAssist AI technology that is currently under development. Perimeter will install its OTIS™ high-resolution imaging devices at partner sites, and enrollment is already underway at Baylor College of Medicine and M.D. Anderson Cancer Center. The ATLAS AI Project is backed by a US$7.4 million grant from the Cancer Prevention and Research Institute of Texas (CPRIT).

Nothing in this publication should be considered as personalized financial advice. We are not licensed under any securities laws to address your particular financial situation. No communication by our employees to you should be deemed as personalized financial advice. The information provided in this article is for informational purposes only and is not a recommendation to buy or sell any security. Please consult a licensed financial advisor before making any investment decision. We hold no investment licenses and are thus neither licensed nor qualified to provide investment advice. The content in this report or email is not provided to any individual with a view toward their individual circumstances. HotStocksReview.com is a website owned by Mountain Capital Corp (“Mountain”), (100 King Street West #5700, Toronto, Ontario). Mountain has been retained by Perimeter Medical Imaging AI Inc (“Perimeter”). to provide strategic digital media, marketing and data analytics services on behalf of the company for an undefined term. The agreement with Perimeter provides for a one-time cash-only payment. This compensation constitutes a conflict of interest as to our ability to remain objective in our communication regarding the profiled company. Because of this conflict, individuals are strongly encouraged to not use this newsletter as the basis for any investment decision.