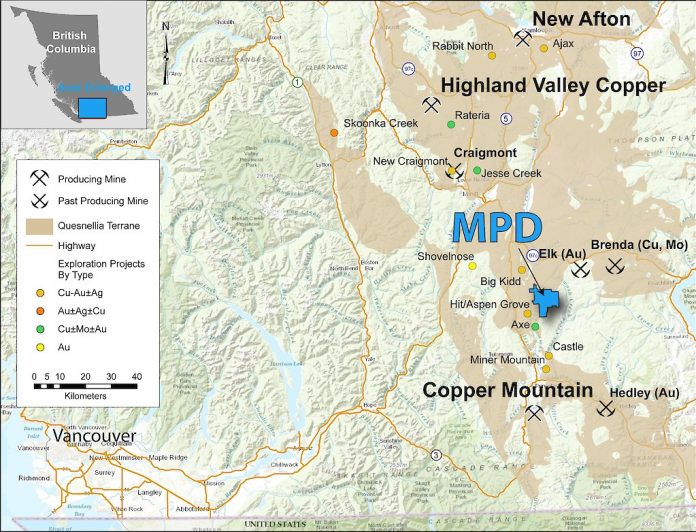 Kodiak commenced drilling at MPD on July 13 (see Kodiak news release dated July 13, 2020) and the program is progressing well. Highlights so far include:

Claudia Tornquist, President and CEO of Kodiak said, “Our Phase II drill program is progressing efficiently and we are very pleased to observe encouraging alteration with sulphide mineralization in all drill holes. Just over half of the planned meterage has been completed to date. We are looking forward to the first new Phase II drill results in the coming weeks and are already planning the next phase of work and a potential acceleration of our drilling.”

The 2020 exploration program at MPD began with a property-wide ZTEM TM  airborne geophysical survey which provided important data down to a depth of 1000 metres which is helping the Company prioritise targets for this and future drill campaigns (see Kodiak news releases dated April 8, 2020 and June 17, 2020).

Mobilization of field staff and equipment commenced mid-July for 2020 Phase II diamond drilling at MPD. The program is initially focused on expanding significant drill results from the Gate Zone, using step-out drilling to expand the high-grade mineralization drilled last year. The Company has also identified several additional high-priority targets across the MPD project believed to have strong potential for similar copper-gold mineralization. Most of these targets have encouraging shallow historical drill holes, and/or positive trench and surface sampling results. The 2020 Phase II drill program at MPD will consist of approximately 4000 metres of core drilling with results expected in Q3/Q4.

Jeff Ward, P.Geo, Vice President Exploration and the Qualified Person as defined by National Instrument 43-101, has reviewed and approved the technical information contained in this release.

On behalf of the Board of Directors
Kodiak Copper Corp.

Kodiak’s founder and chairman is Chris Taylor who is well-known for his gold discovery success with Great Bear Resources.  Kodiak is also part of the Discovery Group led by John Robins, one of the most successful mining entrepreneurs in Canada.