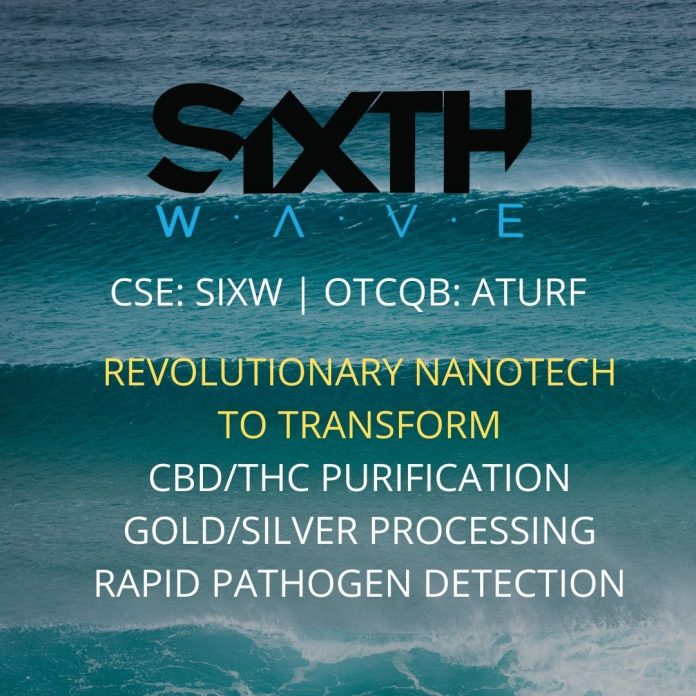 In the mining sector, Sixth Wave is working with giants such as Sumitumo and Agnico Eagle, and has a sales representation agreement with German mining chemicals specialist CyPlus, active in over 100 countries.

More recently the Company started working with Rio2 Inc. for the trialling of Sixth Wave’s patented IXOS® purification polymer for Rio2’s Fenix gold project in Chile (one of the largest undeveloped oxide gold deposits in the Americas).

Sixth Wave Innovations is in the process of transforming itself from R&D to global commercial sales and aspires to become a nanotech powerhouse.

With a market capitalization of under $30 million, shares of Sixth Wave offer a unique and rare opportunity for investors seeking ground floor investments.

This article focuses on Sixth Wave’s remarkable IXOS® system designed to revolutionize processing of gold, silver and lithium for the global mining industry.

Oxide orebodies across the globe are dwindling, leading miners to look for new economic ways to increase utilization at SX-EW plants. At the same time, these operators are chasing higher yields during solvent extraction with cleaner and greener solutions.

Molecular imprinted polymers (MIPs) have been around for some time, but it is only recently that their abilities have been seen on an industrial scale, detecting IEDs and explosives out on the battlefield. MIPs have now found their way into mining.

Sixth Wave Innovations President & CEO, Dr Jon Gluckman, said MIPs’ ability to “discriminate” between metals of significance/insignificance can offer gold miners a process route that is a cheaper, more effective alternative to the conventional use of activated carbon in the elution of adsorbed gold. While activated carbon has been the media of choice for the gold sector for over a century, it suffers from several shortcomings, according to Sixth Wave.

“Its selectivity for gold is not exclusive,” the company states. “It attracts other metals from the pregnant leach solution in addition to gold, including copper, mercury, and other base metals, which reduces its capacity to capture gold. In addition, activated carbon suffers from mechanical breakdown over time, with the result that some gold captured by the product becomes unrecoverable.”

The complete article can be accessed here.

The mining industry has a checkered past when it comes to the adoption of new technologies. This is partly due to the high expense of operating a mine, wherein the cost of failure, in trying something new, could prove fatal to the operation.

An example of a technology that is long overdue for innovation are the Carbon-in-Leach (CiL)/ Carbon-in-Pulp (CiP) processes that have been used for over a century now. Poor recovery is the issue here with more than 10% of mined gold being lost in the cyanide solution using activated carbon. This comes at a huge cost for big producers like Agnico, Kinross and TMAC. A 200,000 oz/year producer could lose over $26 million annually just in cyanide solution and carbon inputs.

Sixth Wave Innovations (CSE: SIXW, OTCQB: ATURF) patented IXOS® platform offers a solution to this recovery issue without causing major disruption or re-engineering of the flowsheets of existing CiL/CiP operators in the gold space. Moreover, the technology has the ability to be extended to the processing of other metals, such as alumina, nickel, cobalt, scandium, mercury, silver and lithium.

IXOS® patented beads have demonstrated recoveries of up to 99% of gold from cyanide leach solutions in laboratory and mine site testing, representing a material increase relative to activated carbon, which recovers between 85%-95% of the gold.

On top of this, the technology is much more cost effective than the equivalent activated carbon route. CEO Dr. Gluckman noted, “On an operating expenditure (opex) basis, we are around 30% of the opex of activated carbon.”

Sixth Wave uses molecular imprinting to produce polymer beads specially formulated to capture a particular molecule. The process creates voids that match the shape of the gold (or other metal) particles and then the particles “complete themselves” by filling the voids.

For the gold company, the nanotechnology offered by Sixth Wave Innovations translates into lower costs and higher profits. The increased gold captured, reduced loss of gold to carbon fines, and low IXOS® attrition from re-use, translate to increased gold per ton of ore processed. Operating expenses are also lower for the Absorption, Desorption and Refining (ADR) plant because a smaller plant is needed and stripping the gold from the IXOS® beads can be done at low-temperature and at a much faster rate than activated carbon. Therefore, less energy is used than in typical gold processing methods.

The company estimates that its molecularly imprinted polymer beads can cut processing costs by over $100 per ounce. The savings are significant to operators of all sizes making IXOS a natural fit for mining companies struggling with cost efficiency. This translates into a potentially huge global opportunity for Sixth Wave and their shareholders.

In 2018 Sixth Wave entered into a services agreement with a subsidiary of Kinross Gold, for the construction and testing of an ADR pilot plant at the Bald Mountain Mine in Nevada. In parallel testing against activated carbon, IXOS® beads exceeded activated carbon in terms of gold and silver adsorption and were more selective against copper.

“SCOA endeavors to create new value and realize prosperity for our partners and customers,” said Ko Akiyama, SVP & General Manager, Sumitomo Corporation of Americas’ Mineral Resources Group. “We believe IXOS® will allow us to provide even better service and operational excellence for our valued customers.”

The company has run smaller pilot tests at approximately 10 mine sites, with positive results. More recently the Company started working with Rio2 Inc. for the trialling of Sixth Wave’s patented IXOS® purification polymer for Rio2’s Fenix gold project in Chile (one of the largest undeveloped oxide gold deposits in the Americas).

The IXOS® application has been demonstrated to save about US$100 per ounce of gold mined. This saving is basically a calculation of the higher proportion of gold extracted from the same tonne of ore.

Sixth Wave will license or make usage agreements where they will earn around 30% of the savings, (or around $30 per ounce of gold mined) with no costs. At $1500 per ounce of gold, this equates to a 2% royalty.

According to the World Gold Council (gold.org), 104 million ounces of gold was produced worldwide in 2019, with 66 million ounces coming out of the top 10 gold producing countries.

Applying a savings of $100/ounce to worldwide gold production equates to a total addressable market of $10.4 billion.

Capturing 2% market share with a 30% usage fee to Sixth Wave would generate $62 million (USD) in annual revenue in gold production alone. When one factors in the potential to also process silver, lithium, cobalt and other metals, the potential opportunity, and upside, to Sixth Wave shareholders, becomes substantial.

There are alternate ways in which the product can be monetized depending on the circumstance of the end-user. For customers that have capital the beads can be purchased and replaced every few years as may be needed. Alternatively, Sixth Wave can provide them at no cost and charge them an OPEX that essentially spreads the normal purchase cost plus a premium for SIXW’s costs of carrying the financing.

In either case the company can offer the miner a support contract as well that keeps the two parties involved in maintaining peak performance for the mine.

Sixth Wave Innovations (CSE: SIXW, OTCQB: ATURF) IXOS® application is well on its way toward becoming de-risked and put to use in gold mining operations throughout the world.

For investors this could be a rare opportunity to get into a first mover, market share growth opportunity company before the stock gets a significant re-rating, and begins to trade on forward multiples, based on predicted future earnings.